(The following is based on several discussion on the Facebook Philippine American War groupi, we are grateful for the immense wealth of expertise and enthusiasm in researching this issue.)

No estimate has been made in the available literature of civilian casualties during the 1896-1898 revolution nor of civilians killed by Filipino Republican forces during the Philippine-American Warii.

Census figures are immensely problematic especially when comparing the census carried out under the Spanish regime for pre-1899 figures and those under the American regime for the post-1899 period due to different methodologies. Some of the issues are covered in a briefing for the Senate Committee on the Philippine of 1902 (See Appendix).

Many of the Spanish estimates were based on those who paid tributes/taxes. Funds from central authorities were paid on the basis of these figures. To add to the confusion, in some areas, such as Samar, there was a campaign to bring hillspeople to formalise their existence and come ‘under the bells’. By delinking taxes paid with actual population it may well be that populations were over-estiated in some placesiii.

It should be noted that in the years leading up to the Philippine-American War the islands were undergoing a mortality crisis. More and more Filipinos were dying each year from disease as a result of social and economic changes unrelated to conflict. For a fuller discussion refer to Ken De Bevoise book Agents of Apocalypseiv

This FAQ is intended to address the estimates of the number of casualties during the 1899-1902 conflict.

There are two primary sources for this estimate: Writer Gore Vidal and a error in a Spanish census.

In an article entitled American Sissy in the August 13, 1981 edition of the New York Review of Books (NYR)v, Vidal wrote that three million Filipinos died. He claimed this figure came from Bernard Fall’s The Two Viet-Namsvi. Fall actually estimates 300,000 but Vidal had not actually read the source he cited, instead he borrowed it from a publication that cited Fall but added an extra zero in a typographical error in a history of the West Point military academy, West Point: America’s Power Fraternity by K.B. Galloway and R.B. Johnson, Jr.vii which Vidal had once reviewed.

Vidal has admitted the error in Death in the Philippines, December 17, 1981 edition of the New York Review of Books therefore his estimate must be set asideviii.

The claim is that the 1898 Spanish Census showed nearly 10 million population while the 1902 American Census published in 1903 showed a little under 7 million, a difference of about three million.

There was in fact no census carried out in 1898 but an estimate was made in the Guia Oficial in which there was a typographical error that inverted a figure 6 into a figure 9. This error was later corrected by Father Algué, a Spanish priest who headed the Manila Observatory in the late 19th century, as the figure from 1899.

How do we know this is an error? Because the estimates for the two years previously are about 5.5 million with a small increase between 1896 and 1897. An increase of 4 million in a single year to more than 9 million is impossible, regardless of the virility of the Filipino or the fecundity of the Filipina.

Here are the raw figures as given in the 1903 Philippine Censusix.

Original copies of the Spanish estimates contain the 9,703,311 and since it was Father Algué, a Spaniard, who corrected the figure it would be fanciful to suggest that the correction was made by the Americans to conceal the 3m drop.

A few pages later is the following corrected table:

This usually comes from writers quoting literary critic E. San Juan Jr. who gives it in numerous articlesx. It is claimed to be the figure for 1899-1905.

In An African American Soldier in the Philippine Revolution: An Homage to David Fagenxi he cites Luzvimida Francisco: “Filipina historian Luzviminda Francisco arrives at the figure of 1.4 million Filipinos”xii

He is citing Ms Francisco’s The First Vietnam: The U.S.-Philippine War of 1899 in which she does not conclude any such figure. The figures she does mention includes the supposed Bell estimate of 600,000 in Luzon alone, which is dealt with below but suffice to say the figure is dubiousxiii.

E. San Juan’s own cited source does not support the figure he claims. He may have some other source which he has not shared with us.

Should data become available that will enable us to examine this figure more closely we will do so.

Why is it important to determine E. San Juan’s sources? In part that is answered by San Juan’s quoting of Karnow’s In Our Image in numerous articles: “Stanley Karnow’s In Our Image (1989), the acclaimed history of this intervention, quotes the figure of 200,000 Filipinos killed in outright fighting.”xiv. What Karnow actually said was: “”The U.S. forces, by their own count, killed some twenty thousand native soldiers. As many as two hundred thousand civilians may also have died from famine and various other causes, including atrocities commited by both sides.”xv

Manuel Arellano Remondo, in General Geography of the Philippine Islands: “The population decreased due to the wars, in the five-year period from 1895 to 1900, since, at the start of the first insurrection, the population was estimated at 9,000,000, and at present (1908), the inhabitants of the Archipelago do not exceed 8,000,000 in number.”

It is one of the few estimates that includes the revolution against Spain.

This statement is frequently circulated having appeared in Max Boot’s Savage Wars of Peace.

Remondo was a Spanish Dominican friar who taught at the University of Santo Tomas who arrived in the Philippines in 1895xvi.

This is the figure given by Ken De Bevoise in Agents of Apocalypse: Epidemic Disease in the Colonial Philippines. De Bevoise examined Spanish and American health records.

General James Franklin Bell made no such estimate. Nor did anyone else called Bell.

An entirely different General Bell, James M Bell, was reported on the front page of the The New York Times, May 2, 1901: “one-sixth of the natives of Luzon have either been killed or have died of the dengue fever in the last two years.” However, this Bell was only covering three provinces in southern Luzon, the hemp growing areas and had no experience elsewhere.

Here is the report:

We have not been able to determine who translated one sixth into 600,000, an estimate that was repeated and repeatedly creditted to the wrong general for several decades. One can reasonably suggest that someone applied one sixth to the total population of Luzon at the time to come up with the figure of 600,000,

It has been suggested that James Bell extrapolated from deaths in his own area to Luzon.

He commanded forces in Camarines, Albay and Sorsogon which have a total population of 600, 226xvii. One sixth would have been 100,000 but there is nothing to even slightly suggest that his operations plus disease resulted in a death total of that magnitude.

One humbly suggests that in the comments to the reporter – and there was only one report, taken by wire to other newspapers, so one cannot cross check with other independent reports – James Bell said that his area comprised one sixth of the population of Luzon and that there had been deaths from dengue and the fighting.

It may simply have been a matter of misreportage.

Various authors provide figures in the above bracket have been presented by various authors from John M. Gatesxviii and Karnow to Bernard Fall. Give that more than 200,000 died of Cholera and Small Pox alone in 1902, when two Cholera epidemics swept through the country, it is likely that these are under-estimates and that De Bevoise’s figure of 775,000, around 10 per cent of the entire population, is closer to actual losses.

Genocide is the deliberate attempt to exterminate a people as a matter of state policy.

There is no evidence that the disease burden that killed so many was introduced or propagated deliberately and much evidence of intense efforts made to mitigate their effects. Franklin Bell’s insistence on mandatory smallpox vaccinations in the reconcentration camps of Batangas show that serious efforts were, in fact, made to reducexix the disease death toll.

It is notable that little to none of the evidence available is of the quality of that in other areas where genocides are known have taken placexx. In Cambodia, for instance, the evidence for the genocide that occurred under the Khmer Rouge is undeniable. It had roughly the same level of population, the Khmer Rouge period lasted about a long as the Philippine-American War, and caualties were on a similar scale to those claimed at the higher end by proponent of genocide.

So far, some 23,000 mass graves showing evidence of violent death have been found in Cambodia and continue to be found. Despite photographs of cemetary boneyards and trenches of dead combatants there has been no discovery of ‘killing fields’ in the Philippines. There are few first hand accounts of the alleged genocide in the Philippines by survivors or perpetrators (Although there are accounts of individual atrocities).

Certainly there were atrocities, and on both sides, and nothing can justify them, but these do not themselves justify the term ‘Genocide’, despicable though they were. 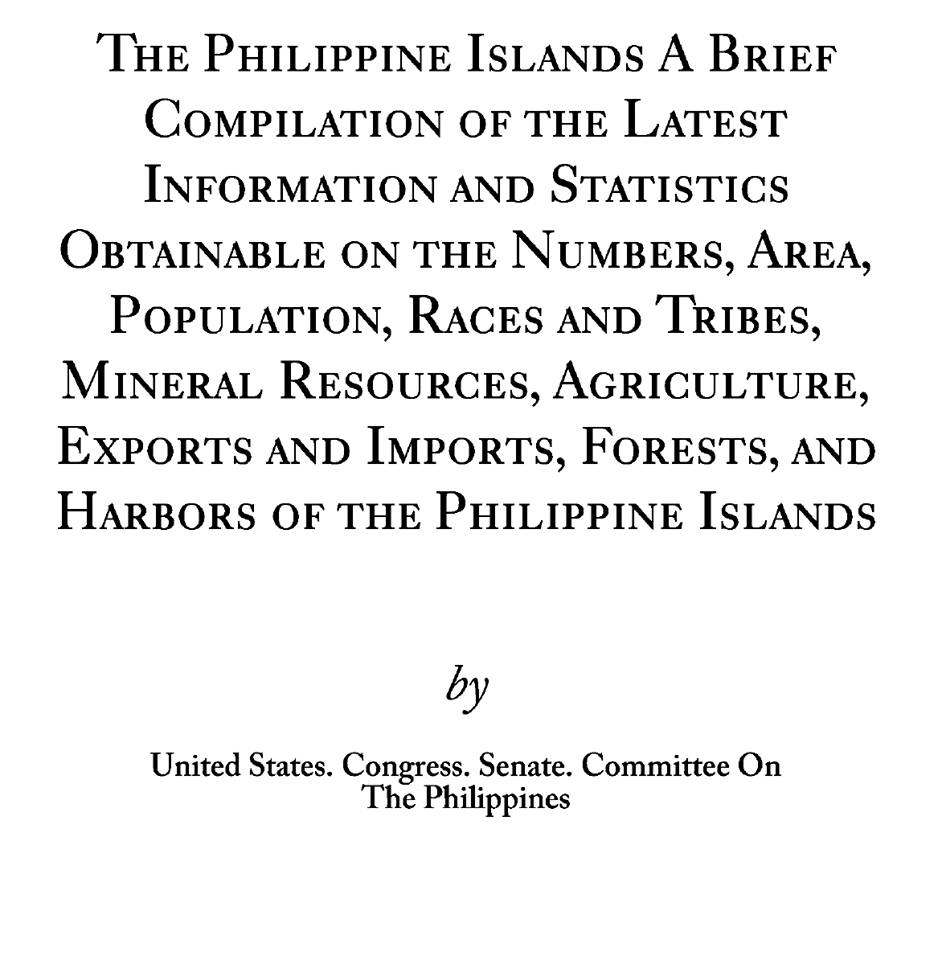 ii Many complaints were sent to Emilio Aguinaldo of forces nominally loyal to the Republic and may be found throughout the  Philippine Revoutionary Records/Philippine Insurgency Records, consisting of an estimated 600,000 documents compring Philippine message traffic, located at the National Library of the Phiippines and the the US National Archibes. A selection of them also appear in the last three volumes of John RM Taylor’s The Philippine Insurrection Against the United States, 5 vols. (Pasay City, Philippines: Eugenio Lopez Foundation, 1971)

ix Census of the Philippine islands, taken under the direction of the Philippine commission in the year 1903, United States. Bureau of the Census.1905. It is available online: https://archive.org/details/censusphilippin01ganngoog

xii San Juan, E, U.S. Genocide in the Philippines A Case of Guilt, Shame, or Amnesia? 2005

11 thoughts on “Philippine Genocide? The Numbers Don’t Add Up”