And so we reach the final part of the examination of the document that lays at the heart of the Tallano claims, Oct 01-4. The remainder of the alleged translation continues to present evidence of an incompetent fraud dressed up with a klutzy version of 1960s pseudo-legalistic language, ignorance of Philippine history and the protocols in use at the time.

Let us look at this last section: 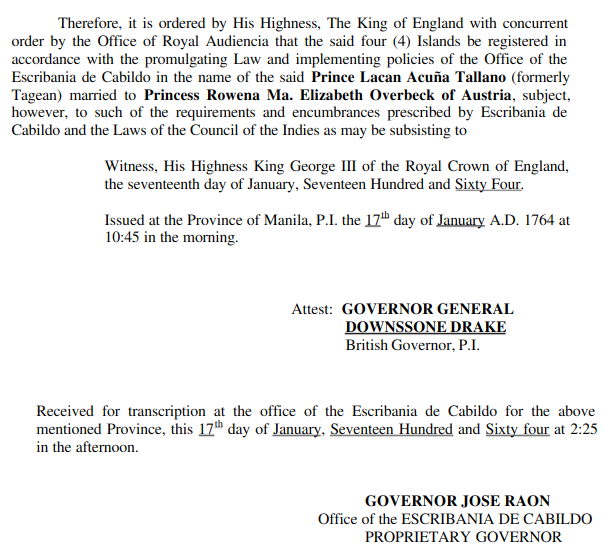 George III could not have witnessed the signing of the document in Manila since he was in London at the time. Had someone signed on his behalf there would have been a notation ‘for and on behalf of’ with a second signature of the person who so signed.

Plus, of course, George would have signed the document, not merely witnessed it.

Perhaps the biggest fluff is the assumption that the King had executive power to sign such a document without the approval of Parliament. The last British monarch to exercise absolute executive power was Queen Ann in 1708. By George III, such an agreement would have required the approval of Parliament, which would have been referenced in the document.

Note that Drake was governor on behalf of the East India Company, yet the company receives no mention in this document.

The document indicates that Drake had received communications from London prior to 17 January 1764. That is several months after the signing of the Treaty of Paris so it is extremely odd that those communications did not include instructions to handle Manila back to Spanish control.

The first such instructions were handed to Drake by Francisco Javier de la Torre in March. De la Torre remained governor until he was succeeded by José Antonio Raón y Gutiérrez who took office as governor on 6th July 1765, a year and a half before his name appears on the Tallano document.

At the time he is alleged to have signed this document, José Raón was in Panama.

So, we reach the end of this phase of our journey examining the claim that the Philippines is the richest country on the planet due to thousands of tonnes of gold held by the Tallanos, a claim in which Oxt 01-4 plays a key role.

The alleged document is at best a clumsy hoax, at worst a fraudulent document used through the courts of the Philippines to pursue a land swindle. No other conclusion is possible.

5 thoughts on “Interrogating Tallano – Is the Philippines the richest country in the world? Part 11”