Most of us who delve into Philippine history are familiar with the 1914 photograph of William Howard Taft astride a carabao. The main thing to know about this photograph is that it is a hoax. Taft was never photographed on a carabao.

Yes, it is a fraud of a type as common then as Photoshopping is today.

Even Philippine historians have been fooled by it, and so was I until I came across a comparison and overlay of this photograph and another of Taft on a horse. Hence it earns its place in this selection of frauds and fallacies in Philippine history.

He was a big man in every way. Standing at around 182 centimetres (5′ 11.5′) he weighed a whopping 145 kilos, about 320 pounds at one stage. His size and weright made him the butt of jokes. Secretary of War Elihu Root, worried about Taft’s health sent a cable to the Philippines enquiring about him. Taft assured Root that he was fine and had just finished a twenty-five-mile horseback ride and was feeling fine. Root responded: “How is horse?”

He was once described as “like an American bison, a gentle, kind one”, a note that would also match the carabao.

Since we’ve mentioned horses, here’s a picture of Taft on a horse: 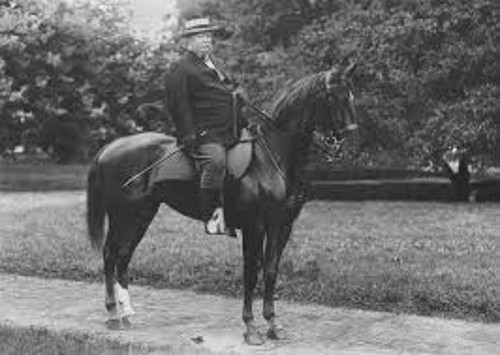 And here’s the carabao/Tamaraw photo:

One giveaweay that the carabao photo is a fake is that the reins/ropes don’t connect to the animal’s nose.

Now lets compare the Tafts in the two images side-by-side:

The images are identical down to the trouser creases. Such cut and paste composites were common at the time, cut out one image and paste it on another, rephotograph the assembly and retouch to take care of shadows

There you have it, our favourite Taft-in-the-Philippine photo is a fraud.