Although ice was available in Manila, cold storage was another matter. Posh houses, hotels and so on, could store vegetables, fruit and water in their ice boxes but unless you had a convenient cow in your yard, as the Tafts did, fresh milk was a luxury.

Vendors sold carabao milk which had been brought into Manila by train, kept in a store at ambient temperature overnight then put on the streets as late as 4pm. To say the least, it wasn’t in the best of condition by the time it was purchased, and any bacteria would be thriving well.

With no wholesale cold storage available various chemicals, including formaledhyde would be added.

No wonder canned milk was preferred by those who could afford it.

Americans, including 60,000 soldiers at any one time, demanded beef but it was often so putrid when imported from the US that even those who cooked it would run away and throw-up. Again, chemicals were used resulting in meat of varying degrees of inedibility.

Australia developed the first refrigerated ships and the Americans in the Philippines became the backbone of the Australian beef industry. But there was a need for somewhere cold to store it.

Another ice issue arose from efforts to fight infectious diseases through vaccination throughout the islands. Ice chests could keep vaccines fresh but ice was not available outside Manila, at least in the quantities needed.

Ice could be a matter of life and death.

February 4, 1899, came and for the next three and a half years Filipinos fought a war of independence against the United States. It was a brutal, controversial confrontation, as all wars tend to be.

With the war came the first known American ice-plant on the orders of military surgeon William Henry Corbusier, who arrived in Manila on September 28, 1898 with his personal ice box for the first of two tours of duty.

He bought the plant in San Francisco from the Vulcan ironworks and had it transported to Cavite. It did not stay there because a civilian engineer wanted it condemned so he could buy it cheaply.

Corbusier set about installing an ice plant in Manila instead. While the new plant was being built he had to buy ice for hospitals from the San Miguel brewery. At one point San Miguel ran out of ammonia and Corbusier lent some from his supply because there were no other supplies in the islands, which suggests a lack of such plants elsewhere.

For drinking water he built a charcoal filter, used Pasig river water, boiled it and kept it in his ice chest.

In May 1900, Corbusier took a trip to Zamboanga, stopping at Ilo-ilo to replenish ice. However, salt water had been used in the plant’s boiler and it was not working so he bought coconuts for drinking, a common practice to ensure safe water.

Ilo-ilo was a major trading centre based on sugar and fairly wealthy. While it is conceivable that its ice plant dated back to the Spanish era the Americans had occupied it in February 1899 and had been there for a little more than a year by the time of Corbusier’s visit. It was most likely that it was installed by the Americans.

Corbusier does not explain how salt water came to be in the boilers.

In Tacloban, Leyte, he bought coconuts again, from which it is safe to assume there was no ice plant there.

On a second tour of duty in 1903, Corbusier went to Zamboanga and mentions an ice plant. This is late enough in the American occupation to assume this was American-supplied.

Ice was no longer a luxury. It allowed for the storage of fresh meat and vegetables, relieving soldiers of endless dependence on tinned and dried food. It had uses in hospitals and the distilled water produced by the plants were often the only guaranteed safe water other than coconut water. There was also a terrible downside. During the conflict on Samar almost the entire population of carabao, essential for agriculture, was slaughtered and sent to Manila to provide beef for American soldiers. That beef transport was only made possible by cold storage. The recovery of Samar was slow and contributed to the rise of the Pulahanes. 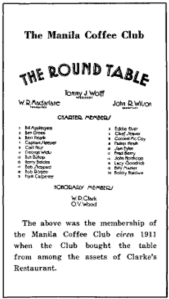 If Napoleon’s private soldiers kept a general’s baton in their knapsacks then American soldiers kept a business plan for an ice plant. Privates like William Oliver Trafton talked about the businesses opportunities offered by setting up ice-plants in letters to friends.

It is in December 1899 that the first confirmed sighting of an ice cream parlor appears with the establishment of Clarke’s at 2 Escolta by Metcalf A Clarke. Its signature product was Pink Ice Cream, although no-one seems quite sure what it tasted like, except that it was a poor substitute for what was on offer in the US.

Clarke’s ice-cream apparently had what one American veteran called a ‘Borden flavour’. Borden was a brand of condensed milk. Older Filipinos recalled it having a tinned milk taste, His recipe has yet to be uncovered. Sterilised milk was not yet available but evaporated milk had been invented in 1891 and may have been one of his ingredients.

His ice cream parlor became the place to go with the help of PR notions such as ‘you’re not really famous until you’ve had your photo taken at Clarke’s’. Clarke spread his wings and set up bakery and confectionary companies and had an interest in an amusement park called Palomar Park. He was making a fortune, one which he was to lose.

A round table was established at Clarke’s where American businessmen, government officials and others would meet for coffee at 10.30 each morning. It was around this table that Clarke and others organised Benguet Consolidated mining company at Antamok Creek in Mountain Province.

He mortgaged everything he had to develop the mine, which looked very promising. In 1911 heavy rains washed away all the mining equipment and flooded the mine itself. Clarke was wiped out. The Bank of the Philippine Islands sold off the contents of the ice-cream parlor.

Broke, Clarke returned to Chicago, where he was to die. The fates were not with him – the mining company was acquired by others and hit it big, becoming what was said to be the largest gold strike in the Orient.

Nothing remains of Clarke’s except for its legend, a few fading photographs and the round table at which his ill-fated gold mining venture was put together. The table was bought by a group of American businessmen who formed the Manila Coffee Club. The club and the table moved to a couple of restaurants over the next few years before ending up and what is today the American Chamber of Commerce, AmCham, where it sits today office of the AmCham Executive Director, Ebb Hinchcliffe, and continues in use for meetings – and admiration – daily.

By now, the Philippines has ice, ice cream and evaporada. But we are two or three decades away from putting those together in the classic Filipino cooler : Halo-halo. The next stops in our journey take in ice plants saving lives in a devastating cholera epidemic, a government ice-plant losing money and a bankrupt brewery in Hong Kong. We’ll tell you about it a las quatro.

Part Eight: Halo-halo to All That