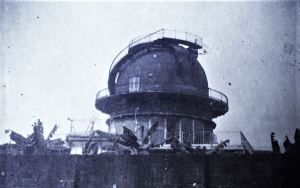 “World-class” is a weasel-word much used by advertisers and PR folk in the Philippines to sell dreary multi-storey condominiums, built over a once-beautiful city, from which Manila’s moneyed classes can look down upon lesser orders toiling below. Back in the 19th century, however, Manila could boast a centre of excellence that could rightfully be called world-class, one plugged into, and contributing to, global scientific trends and saving Filipino lives – the Manila Observatory.

Those who make the pilgrimage to F. Sionil Jose’s La Solidaridad bookshop will be familiar with Padre Faura street, which bears but the faintest of traces of past glories, like a maiden aunt long gone to seed behind too much pancake makeup and inappropriate lipstick peeking from behind the curtains. Formerly called Calle Observatorio, it was at the Ateneo Municipal on this road that Manila Observatory became famous after more modest beginnings within Intramuros, the Walled City.

Though one would get no sense of that history walking around the Robinson’s Shopping Mall in Ermita where Ateneo once stood.

Worthy though Padre Federico Faura’s claim to fame, another director of the observatory deserves commemoration – a man who cared more about using science to save lives than war, put his life on the line to protect the observatory and had his citizenship revoked – Padre Jose Algue.

Let’s take a trip in time to 22 February 1895 and tour the Manila Observatory through the eyes of American merchant Joseph Earle Stevens:

“Manila is said to have the most complete astronomical, meteorological, and seismological observatory anywhere east of the Mediterranean. Not to miss anything of such reputation, several of us decided to make a call on Padre Faure, who presides over the institution, and who is well known scientifically all over the world. At the observatory we were cordially received by an assistant, who spoke English well enough to turn us off from using Spanish, and were
conducted over the establishment.

“Here were machines which would write down the motions of the earth in seismological disturbances, and which conveyed to the ear various subterranean noises going on below the surface. Still other instruments were so delicate that they rang electric bells when mutterings took place far underground, and thus warned the observers of approaching trouble. Another, into which you could look, showed a moving black cross on a white ground, that danced at all the slight tremblings continually going on; and the rumbling of a heavy cart over the neighboring high-road would make it tremble with excitement.

“A solid tower of rock twenty feet square extended up through the building from bottom to top, and was entirely disconnected with the surrounding structure. On this column all of the earthquake-instruments were arranged; and any sort of an oscillation that took place would be recorded in ink on charts arranged for the purpose. Various wires and electric connections were everywhere visible, and an approaching disturbance would be sure to set enough bells and tickers a-going to arouse one of the attendants.

“The great school-building in which the observatory was placed was fully six hundred feet square, with a large court-yard in the centre containing fountains and tropical plants in profusion.

“After leaving the lower portions of the building, we ascended through long hallways, to visit the meteorological department above. Barometers, thermometers, wind-gauges, rain-measurers, and all sorts of recording instruments filled a most interesting room; and Padre Faure gave us a long discourse on typhoons, earthquakes, and various other phenomena. From the roof of the observatory a splendid view of the city, Bay, and adjacent country may be had, and Manila lay before us steaming in the sun.

“Before leaving, we s

aw the twenty-inch telescope, constructed in Washington under the direction of the Padre who was our guide, which is soon to be installed in a special building constructed for the purpose. He seemed much impressed by the United States, and at our departure presented us with one of the monthly observatory reports, which give the whole story of the movements of the earth, winds, heavens, tides, stars, and clouds, at every hour of the day and night, for every day during the month, and for every month during the year”.

The story of the observatory began on 1 January 1865 when the Superior of the Jesuit Mission in the Philippines, Padre Juan Vidal, assigned the Ateneo Municipal physics teacher, Francisco Colina to set up a weather station on the roof of the college, then at the south corner of Anda and Santa Lucia streets in Intramuros, With typhoons a regular occurrence in the Philippines it was was intended to learn more about how weather worked and find a way to predict the arrival and characteristics of typhoons.

At the same time, there was a bit of competition going on: Jesuits in Batavia, Cuba and elsewhere had set up up meteorological observatories so the Jesuit mission in the Philippines did not want to lose the opportunity of being at the forefront of studied into weather prediction.

It was a modest set-up: a domestic thermometer, a hair hygrometer4, an oil hydrometer and an anemometer that basically consisted of a cloth on a pole to measure wind speed, according to the rather dismissive Father Pastells, Jose Rizal’s penpal. The opinion of the pigeons whose loft these instruments occupied is unknown.

Colina’s efforts got a boost in September that year when he recorded the progress of a typhoon that hit just north of Manila. The effects of the typhoon, especially boats swept up on the beach to the west of the college, fascinated a fellow member of staff, Jaime Nonell. He had not seen the aftermath of a typhoon at close quarters before and, unlike Colina, had gained some experience in meteorology in Europe.

Novell took Colina’s figures and translated them into graphs. Colina showed them to the editor of a newspaper, Diario de Manila, who had them printed on a separate insert to his publication and distributed it to his subscribers. It got the attention of Manila’s Merchants and shipping companies who petitioned Vidal for regular observations and recordings, in the hope that a way might be found to predict typhoons.

Nonell answered the petition by pointing out that the observatory would need better equipment than its rudimentary instruments. What was needed was a device like the one invented at the Vatican Observatory by Angelo Secchi, the Universal Meteorgraph at a whopping cost of at least five thousand dollars Mex.

Pricey though the Secchi device was, its value represented a fraction of what savage typhoons cost the country and its sea-transport dependent industry, not to mention the effect on valuable export crops such as sugar and hemp, so in  short order, with the help of the Dutch consul, G. van Polanen Potel and businessmen Don Maximo Paterno – father of Pedro Paterno, and Ramon Genato, six thousand dollars Mex. When Colina left Manila on June 22, 1867 to study theology in Europe he met with Secchi in Paris, where the Universal Meteorograph was being exhibited at an exposition, to discuss the device .

Almost exactly a year before Colina’s departure, Federico Faura, not yet a priest, arrived in Manila to teach science and takeover the operations of the observatory on 20 June, 1965. He went down with a fever, which returned at frequent intervals and developed asthma. He proceeded to build the observatory’s information network, connecting with similar facilities elswhere in the region such as Hong Kong as well as Jesuit outposts around the Philippines.

The vital Secchi Universal Meteorograph would not arrive in Manila until 1869, in the meantime, Faura busied himself with organising an expedition to observe the total eclipse of the Sun on 18 August 1868. This required him to transport himself, his team and the necessary instruments to an island, Taliabu, in the Dutch East Indies, in the path on which the Moon would precisely cover the Sun. a goal that was touch and go from the start and its success depended upon luck and ingenuity.

It proved to be an adventure thmat firmly plugged the observatory into the international science community.

Next: The King of Siam’s Eclipse.

2 thoughts on “When Manila’s Weather Really Was World-Class and The Man Who Lost His Country For Saving Lives: Part One”